How the Mersey Ferries helped win the First World War

They are celebrated in Mersey song and romance but 90 years ago, two ferries left the river and sailed to glory at Zeebrugge. 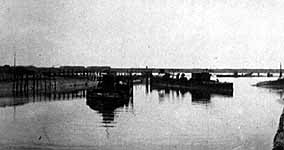 THE milk to join the drooping teabag in the war historian’s cardboard cup is sealed in a squashy, plastic tube on a shelf behind the tables in the waterfront cafe, where there are two customers.
He squirts it as instructed and the tea turns a lighter brown. Is this the country that turned men into heroes? Perhaps it is, who can say now? A few hundred yards down the rolling, grey waters of the old river, a Mersey ferry boat approaches Birkenhead from Wallasey. The black-coated historian walks down the gangway from the cafe to watch her thump the fender-tyres at the Woodside landing-stage, where she is tied up. Look at the name painted in white letters on the hull. It’s the Royal Daffodil.
Ninety years ago, another ferry of this name joined her sister ship, the Iris, on one of the most daring raids of the Great War – giving a propaganda victory to Britain when the public was weary of death. Mothers and sweethearts across the land were grieving for loved ones.
It was 1918 and the Russians had withdrawn from the war to concentrate on their own Revolution, so the Germans and Austrians had millions more soldiers for a massive, spring offensive on the Western Front. Adding to the misery were German U-boats, the hidden menace lurking in our waters. About 400,000 tons of Allied Shipping was being lost each month – about a third of it to attacks from U-boats at Bruges, joined by a canals to the coast at Zeebrugge and Ostend. But supposing the U-boats were trapped in the harbour? So was born the idea of sinking three old cruisers – the Thetis, Intrepid and Iphigenia – to block the U-boats.
This is the subject of a book by Stephen McGreal, a carpenter whose interest in the First World War has already resulted in books about the Moreton Patriots and Cheshire Bantams. Although the attack on Zeebrugge achieved little and the one on Ostend failed, they pumped up British morale, showing we could sting the Germans in occupied territory. For their “conspicuous” part in the operation, King George V granted permission for the Iris and the Daffodil, and their successors, to use the Royal prefix. Stephen smiles as a scattering of passengers step off the modern Royal Daffodil. A voice on the public address system gives a brief account of the Zeebrugge raid. This is part of our history, a time when the humble, workaday boats of the brooding Mersey sailed into glory. However, the ferries, built on the Tyne in 1906 and replated and modified at the Cammell Laird shipyard in Birkenhead, were ideally suited to the task.
The Iris was 491 tons and the Daffodil 482 tons. Both were 159 feet long. Both could carry 1,700 passengers. Crucially they had a shallow draft allowing them to skim over the mines floating beneath the surface. They were also robust enough to approach the Zeebrugge mole – a protective wall curling towards the North Sea and heavily defended by the Germans. Wallasey Corporation was a little reluctant to lose two of its ferries, but on learning of their intended role in the raids, it offered the whole fleet. The public was told that they had been requisitioned to transport American troops across the Atlantic. The sense of adventure in all this appealed hugely to Stephen, an old boy of Wallasey Grammar School and the son of Frank, a GPO engineer, and his wife, Agnes, a florist. After a shipwright’s apprenticeship at Cammell Laird, Stephen has worked as a self-employed carpenter, specialising for a while in superbly crafted rocking-horses. He lives in Moreton, Wirral, with his wife, Anne. They have three children.
Now 55, Stephen grew up when the flags of Empire were being lowered across the globe. But Vice-Admiral Roger Keys, who initiated the raids, was raised in the imperial tradition, having been brought up as the son of a brigadier on the Punjab frontier. “I was about eight when I first heard of the raids,” says Stephen. “My parents had a flower shop in King Street, Wallasey. I remember the old veterans marching up the road to a reception at the Town Hall.
“None of the ferry crews took part. When the ships left the river, engineers took them down south, but they were replaced by members of the Royal Navy. “In 1918, we didn’t know whether we were going to win the war or not. We were being pushed back by the German spring offensive and the level of casualties was filtering through. “The raid was championed for all it was worth because the propaganda benefit was enormous. It literally changed the whole prospect of the war to the civilians. Our boats were in German territory. “The Royal Marines had landed, the ships got away, though we lost the destroyer, North Star. Imagine if the German Navy had been able to come up the Mersey.” So 90 years ago the Mersey ferries set off on their most famous trip – to Belgium.
ZEEBRUGGE and Ostend Raids by Stephen McGreal is published by Pen and Sword Books at £12.99.
Gepost door oronieuws op 12:53
Nieuwere post Oudere post Homepage