Pros and cons of Zeebrugge compared to Antwerp 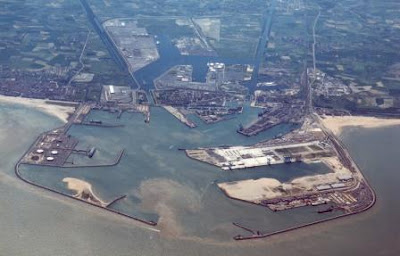 (Financial Times London 05.12.2007)
It says a lot about the challenges of manoeuvring a modern large ship that the port of Zeebrugge, on Belgium's North Sea coast, is one of the region's easier ports to enter. Vessels approaching the harbour have to power ahead with their bows pointed at the wall to the port side of the harbour entrance, to counteract a cross-current pushing strongly towards starboard. Once inside the breakwater, they have to make fast quickly to tugs, to slow down and to manoeuvre inside the port, whose slimy sea-bed tends to interfere with larger ships' steering.
Figures for traffic growth at Zeebrugge and other ports in the North Sea region suggest shipping lines increasingly prefer taking the minor risks of using such ports near the North Sea coast to taking increasingly large, expensive ships up the region's rivers.
Container traffic at Zeebrugge in the first six months this year was 27.1 per cent above the same period the previous year. At Antwerp, 100km inland and four hours' sailing time up the River Scheldt, growth was a more modest 16.9 per cent in this year's first nine months. One of Germany's biggest port developments is taking place at Wilhelmshaven, on the North Sea coast, several hours' sailing time downriver from Germany's traditional port centre at Hamburg.
The question is what these developments say about the future of the North Sea region's ports. To some observers, it suggests that the gradual drift of ports towards the sea, which has been under way ever since container ships first started growing too large for old, traditional city-centre docks, will continue.
To others, it suggests that shipowners are growing desperate to find ports with spare capacity - and previously-overlooked ports such as Zeebrugge and Dunkirk are almost the only places to find them. The truth is a complex mixture of the two and other factors.
Martin Poulsen, vice-president for Europe at APM Terminals, insists the growth of the coastal ports is addressing a serious issue facing the container ports industry. It is growing increasingly hard to fit deep-draught ships nearly 400m long and 15m deep up rivers that governments are often reluctant to allow to be dredged deeper. Dutch objections have so far blocked deeper dredging of the Scheldt to Antwerp, while Hamburg also faces severe challenges dredging the Elbe. "The bigger vessels will want to look at the facilities that are a little bit easier from a nautical perspective," Mr Poulsen says.
Advocates of the river ports, meanwhile, say they remain the ideal means of bringing in goods because they can be carried much closer to their eventual users. That factor, they believe, has helped Hamburg and Antwerp to retain their places as Europe's second and third-busiest ports after Rotterdam. Eric Noterman, managing director in Antwerp of Dubai-based DP World, whose company has around half the port's container-handling capacity, points out that if a container ship unloads 1,000 containers at remote Zeebrugge the containers will typically have an extra 100km to travel over land. Land transport - whether by rail or road - is always more expensive than transport in an efficient ship. Antwerp has far better-developed inland links - by rail, road and waterway - to key markets such as Germany. Both DP World and Singapore's PSA, the other main container terminal operator at Antwerp, also have the rarity of spare capacity ready to come on stream. Each has half of the huge Deurganckdok development, already partly in use, which will be capable of handling nearly as many containers as all the UK's ports combined when fully developed in 2012 or 2013. While some ships cannot sail up the Scheldt at all states of the tide, DP World has handled some of the world's largest container ships at the Deurganckdok. Only necessity is driving port developers towards the coast, Mr Noterman insists. "If you're looking for greenfield terminals today, especially in north-west Europe, yes they will be located at the seaside," he says. "You don't have that much room to expand elsewhere." However, the market is unlikely to develop only in the direction of coastal or river ports for the forseeable future, according to Mr Noterman. Even the two kinds of port together are unlikely to be able to cater for the rapid demand growth currently under way, after all.
It is far more likely port operators and shipping lines will concentrate on the strengths of each kind of terminal. Zeebrugge may be marketed for its strengths as a site to transfer cargo from deep-sea vessels to smaller vessels bound for minor UK ports, while Antwerp will retain a vital role handling import and export cargo heading for Europe's industrial heart. "I don't think there will be all the cargo in Antwerp or all the cargo will move to a new port and Hamburg or Antwerp will close down," Mr Poulsen says. "I think there will be demand for all the facilities."
Gepost door oronieuws op 09:01
Nieuwere post Oudere post Homepage