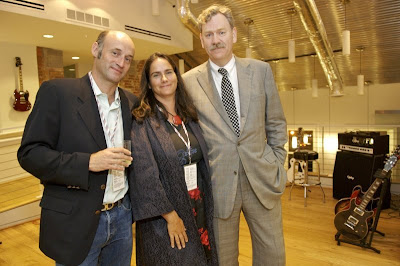 The annual DC Shorts Festival featured a documentary on 415 M Street titled, well, "415 M Street". Made by long time Mount Vernon Square resident Stephanie Slewka the documentary covers the unique history of a house that has been a home, a refuge for the elderly and a place of worship for Jews, Christians and gays, lesbians and transgendered.

We caught up with Stephanie and asked a few questions.

Q. What inspired you to make 415 M St?
A. When the City Museum was about to open, I told a curator I'd be happy to help produce some of their videos. She did not need any help at the time, but she remembered the offer. Months later and much to my surprise and delight, she suggested I make a film about my house for a neighborhood exhibit. What could be better? To make a film about your house, with a deadline, a place to show it, and some help from a researcher at the historical society? I did a fair amount of my own research and spent hours in Southeast trying to find the resting place where members of an Orthodox Jewish synagogue, who had worshipped in my house, were buried.Most people love to give tours of their house. I am lucky that my house at 415 M has enough history to be interesting, and enough people still living who were a part of its history to make the house come alive in the film.The museum had no money by the time they suggested I make this film, so the production company I work with and I made the film in between other assignments, on a shoestring and offered it to the museum for free. We've tinkered with it since but haven't made it longer, which is why it's still a short film.

Q. How long have you been making movies?
A. After (living in Belgium & Holland and then) working in print journalism (in the States) for a long time, I traveled in Africa for a year, crossing the continent from Morocco to Capetown. When I returned I was broke, and the Gulf War was raging. I was offered a television assignment to cover the war, and even though I knew nothing about the medium, I went. I've been working in television making news programs and documentaries since then.

Q. DC Shorts is a great festival why did you decide to enter?
A. I didn't, I was gang-pressed into it. The manager of the production company with whom I often work insisted I enter the festival. "But I don't have a short film," I told her. "You have the house film," she replied. She made me promise I would apply to the festival, which is a good thing. The online application form was so long and laborious I might not have waded through to the end otherwise.

Q. What are you working on now?
A. Finishing up a long term independent project about Street Scenes, a series of public art happenings that have taken place all over DC in the past year. Producing news for foreign broadcasters, translating a French documentary and looking for good film ideas.
Gepost door oronieuws op 19:41
Nieuwere post Oudere post Homepage