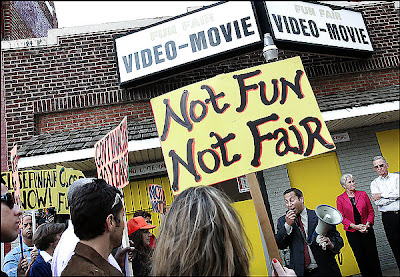 After a neighborhood rally last week against a video store that residents say is a bastion of crime and illicit activity, D.C. Attorney General Linda Singer issued an order to the Board of Zoning Adjustment to expedite its closing. Richard Nero Jr., deputy director of the D.C. Office of Zoning, said this should be good news for the residents, who have been fighting the store for years. "We're sort of the last piece of the puzzle," he said.

Cary Silverman, the coordinator for the Coalition to Shut Down Fun Fair Video and president of the Mount Vernon Square Neighborhood Association, was optimistic about the news.
"I believe we now have the government's attention and that we will be working together as a team going forward," Silverman said. But, he added: "I don't expect Fun Fair's attorney to take this laying down. I expect Fun Fair to ignore the law, as they always have, and try to draw this out in litigation. I am hopeful that Attorney General Singer, with the support of the community, will follow through with the courts and make sure this doesn't get lost in the paperwork."
The Northwest Washington store has been operating in violation of its occupancy code for more than 10 years. The store is not permitted to rent adult videos, but residents say it provides private adult movie-viewing booths for customers. It is "due to a lack of government follow-through," Silverman said, that the video store is still open. A spokeswoman for the attorney general's office, Melissa Merz, noted the "inexcusable delay in past years in addressing this business establishment." Now the attorney general is "moving forward aggressively," she said. "Attorney General Singer did recently meet with the community and certainly understands their concerns, but our order was the product of months of work."
If the store doesn't vacate within 10 days of receiving the Board of Zoning Adjustment's order to close, the attorney general will go to court for a temporary restraining order and preliminary injunction. The board order takes several weeks to process, according to Nero. Fun Fair Video sits on a shaded city block at 919 Fifth St. NW. Over its yellow door, stenciled in red, are the words "No Loitering." Across the street is a painting-goods store with bars on the windows, Popular Cuts Barber Shop, Subway Liqueurs and a women's shelter. A short block north, a big sign shining hangs on a tall new building and reads "CityVistaDC.com, Shop, Workout, Picnic, Swim, Dine, Live here." A block south, more new condominium developments line Massachusetts Avenue.
"It's too sketchy at night," said Mike Connell, 38, an accountant who lives in a 12-story condo building across the street. "You feel like you're not safe walking two feet from your building."
When roommates Richard Vanornum, 24, and Brett Celedonia, 25, come home to that block late at night, they take a cab the three blocks from the Chinatown Metro station. "It's a hostile environment," Celedonia said. And Vanornum thinks the problem is getting worse.
Susan Farmer, a technology consultant, and Stephanie Slewka, a freelance TV producer, both have toddlers. They walk longer routes from their homes to avoid Fifth Street. Slewka, who has lived in the neighborhood since 1993, was glad neighbors were being vigilant about the problem but upset that the District was not enforcing the law. Fun Fair, she said, is "a place that is clearly breeding criminality." One woman, who didn't want to be identified for fear that drug dealers on the street might harm her, said that drug deals occur on the street below her window. The side of her building and her apartment, which she has owned for a year and a half, face the video store. "It's ubiquitous. I can hardly look out my window without seeing a drug deal, drug use or prostitution." She has been threatened by men outside her window, she said.
The woman called the police on a number of occasions but could not get the help she sought -- to end the drug deals. It wasn't until she contacted Cmdr. Diane Groomes that the police became more of a presence. But, like her neighbors, she thinks that until Fun Fair is shut down, the street will not change. "We will never make progress on this street until this toxic mix of businesses [is] taken care of," she said.
Gepost door oronieuws op 10:54
Nieuwere post Oudere post Homepage