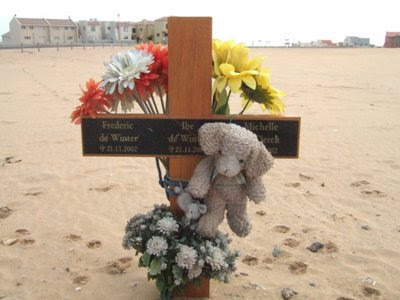 The story in today's Namibian:
THE horrific car crash that claimed the lives of three Belgian visitors to Namibia in late 2002 and later landed former world champion boxer Harry Simon in jail is now set to cost the Motor Vehicle Accident Fund of Namibia tens of millions of Namibia dollars.
Lawyers representing the MVA Fund and one of the survivors of the crash, Belgian doctor Bert Coene, agreed last week that the MVA Fund would pay Coene and his two children, who survived the collision in which their mother was killed, the equivalent of more than N$23,93 million. This agreement is not a final settlement of three claims that Coene has lodged against the MVA Fund on his own and his children’s behalf, though.Parts of the claim on which no agreement could be reached last week would be the subject of a trial in the High Court on a date that must still be set, it was also agreed.A trial on the claims was scheduled to start before Acting Judge Nixon Marcus last week. Instead, lawyers involved in the case met to thrash out an agreement that should limit the issues in dispute when the matter does progress to trial. Coene and his family and another Belgian family were in a rental car at a turn-off to the Langstrand residential area between Walvis Bay and Swakopmund on the evening of November 21 2002 when their Namibian holiday came to a nightmare end. While they were waiting to turn off to Langstrand, an oncoming vehicle approaching from the direction of Walvis Bay slammed head-on into the Belgians’ bakkie.The vehicle that crashed into the bakkie was driven by former world champion boxer Harry Simon.The crash was deadly. Coene’s wife, Michelle de Clerck (29), the driver of the bakkie, Frederick de Winter (31), and De Winter’s 22-month-old child, Ibe de Winter, were killed. The survivors were seriously injured.Coene sustained severe head injuries and multiple fractures. His 18-month-old daughter, Ruth Coene, sustained skull fractures and a brain injury. His almost three-year-old son, Pepijn Coene, suffered head injuries, a broken pelvis and a broken arm.Simon, who also suffered limb fractures in the crash, was sentenced to a two-year prison term in early August 2005 after he was convicted of culpable homicide in connection with the collision. He remained free on bail as he appealed against the conviction and sentence that he received in the Walvis Bay Regional Court, but his appeal was dismissed in the High Court on July 9 2007, and he had to start serving his sentence.The 36-year-old Simon is still an inmate at Walvis Bay Prison.Following the High Court’s ruling on the appeal, the MVA Fund notified Coene’s lawyers in writing that the fund was accepting that it was liable to make a pay-out to Coene as a result of the losses he and his family suffered because of the collision. The fund however did not agree that it was liable to pay Coene and his children the amounts that they were claiming from the fund.Charging that the sole cause of the crash was negligent driving on the part of Simon, Coene, now 39, is suing the MVA Fund for a total of more than N$73,3 million.He is claiming the equivalent of more than N$36,7 million from the fund on his own behalf, over N$35,9 million on his daughter’s behalf, and about N$650 000 on behalf of his son.In terms of the agreement reached by the two sides’ lawyers last week, the MVA Fund has agreed to pay the medical expenses of Coene and his children. Statements setting out the calculation of these expenses until now must first be provided to the fund, though, it was agreed.Coene claimed over N$277 000 from the fund for his and his children’s medical expenses up to now.He also claimed 61 000 euro (about N$788 730) from the fund to cover his and the children’s future medical expenses as a result of the crash. The fund’s lawyers have agreed that the fund would pay this amount.The fund also agreed to pay N$835 000 to Coene to compensate him and the children for the general damages they suffered as a result of the crash. Coene had claimed general damages totalling N$2,25 million from the fund.Coene also claimed a total of 91 402 euro (about N$1,18 million) from the fund for his and the children’s loss of support as a result of his wife’s and their mother’s death. The fund agreed to pay him 43 574 euro (about N$563 000) in this regard.The injuries that Ruth Coene suffered in the crash are projected to have an impact on her future ability to earn an income. Based on this, Dr Coene claimed more than 2,68 million euro (over N$34,7 million) from the fund to compensate his daughter for her estimated future loss of earnings due to a diminished earning capacity. The fund agreed that she has suffered a loss of 1,065 million euro (about N$13,78 million), but could not agree on the way this money would be paid to her, with the result that this issue was also left to be resolved by the High Court at a future trial.On his own behalf, Coene claimed some 2,418 million euro (about N$31,27 million) from the fund to compensate him for his loss of past and future earnings as a result of the collision. His and the fund’s lawyers have agreed that the fund will pay him 579 021 euro (about N$7,486 million) to compensate him for his past loss of income. No agreement could be reached though on the amount that Coene is liable to be paid for his future loss of earnings. That issue, too, was left to be determined by the High Court at a future trial.Lawyers Francois Erasmus and Raymond Heathcote represented Coene last week. Gerson Hinda and Jefta Tjitemisa represented the MVA Fund.
Gepost door oronieuws op 14:36
Nieuwere post Oudere post Homepage